What is the Hoshen (the Priestly Breastplate) and its Significance 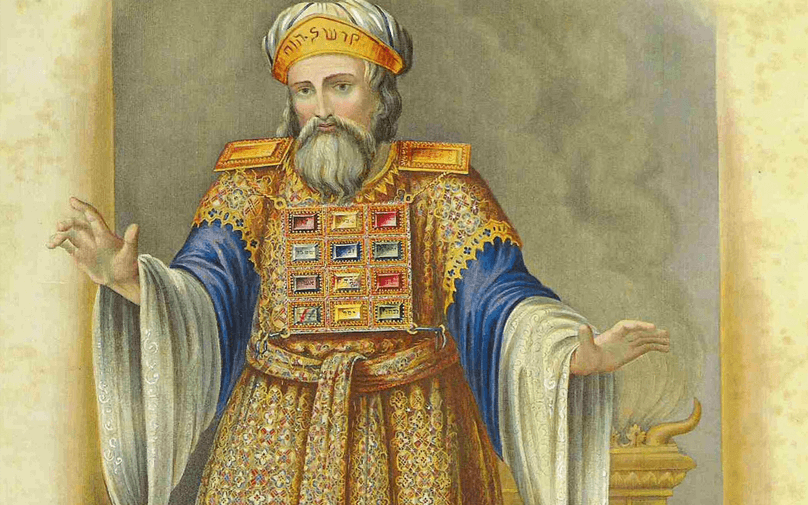 What is the Hoshen (the Priestly Breastplate) and its Significance

“Fashion a breastpiece for making decisions—the work of skilled hands. Make it like the ephod: of gold, and of blue, purple and scarlet yarn, and of finely twisted linen.  It is to be square—a span long and a span wide—and folded double.  Then mount four rows of precious stones on it. The first row shall be carnelian, chrysolite and beryl; the second row shall be turquoise, lapis lazuli and emerald; the third row shall be jacinth, agate and amethyst; the fourth row shall be topaz, onyx and jasper. Mount them in gold filigree settings. There are to be twelve stones, one for each of the names of the sons of Israel, each engraved like a seal with the name of one of the twelve tribes. – Exodus 28:15 – 21 (NIV).

The Hoshen or the Priestly Breasplate is one of the pieces of the elaborate priestly clothes that were prescribed by God to be worn by the High Priest. One of the prominent features of the Hoshen is the precious stones that are mounted into it that represents the twelve sons of Israel. It might be a very beautiful relic of the Jewish faith but what is the significance of the Hoshen to the believers today? What does that symbol of faith means to us right now?

1. Heart of God for His people

The Hoshen is being worn by the high priest in his chest where his heart is the closest. In the words of the Bible, “Whenever Aaron enters the Holy Place; he will bear the names of the sons of Israel over his heart on the breastpiece of decision as a continuing memorial before the Lord.” (Exodus 28:29 NIV). Upon entering the Holy Place, the priest who represents the people before God will have the Hoshen above his heart. This is to remember the kindness and grace of God in choosing His people.

“But you are a chosen people, a royal priesthood, a holy nation, God’s special possession, that you may declare the praises of him who called you out of darkness into his wonderful light” (1 Peter 2:9 NIV). As God’s chosen priest in these last days, we should also take up our Hoshen above our hearts and bring to God the people that still don’t have a relationship with Him. We must stand in the gap for them by coming into the presence of God with prayers and intercessions for their salvation. All of us have a spiritual Hoshen now and God is expecting us to use it whenever we come before Him in prayer and worship.

2. Guidance of God for Decision Making

There is another piece of the priestly clothes that was closely associated with the Hoshen, it is called the Urim and the Thummim. It was mentioned in the verse just right after God mentioned the Hoshen to Moses. “Also put the Urim and the Thummim in the breastpiece, so they may be over Aaron’s heart whenever he enters the presence of the Lord. Thus Aaron will always bear the means of making decisions for the Israelites over his heart before the Lord.” (Exodus 28:30 NIV)

According to some scholars, the Urim and Thummim are two sticks or stones that probably being carried by the priest in the Hoshen and through these objects, God answers the questions of the Israelites regarding important decisions that they should make, for instance, should they go into battle or not. This shows how much the people of Israel valued the will of God during those times. Today, it is so easy to see people who don’t really care what God’s will is. Most people even those who profess that they are believers of God tend to dismiss any attempt to know what God wants.

With our spiritual Hoshen, it should always be a reminder to us to also put the spiritual Urim and Thummim in our hearts. To always seek God’s way and His will for important decisions that we need to make. In our days, we now have a better way to do this. The Scriptures, the writings of the Prophets and the Apostles are available to us. We can always consult with God’s word to know if what we want to do is according to His will and in addition to that, we have the wisdom of men and women of God in our lives.

3. God’s Judgment and His People’s Acquittal

One of the translations that were given to the Hoshen is the ‘Breastplate of Judgment’. It means that whenever the High Priest enters the Holy Place, ‘he shall bear the judgment of the children of Israel upon his heart before the Lord.’ (KJV) God has already sentenced the people of Israel through the sacrifice that Aaron brought for them. They were acquitted and were declared righteous. This is a picture of what Jesus has done for us. Jesus now acts as our Great High Priest in the order of Melchizedek, interceding for us before the Father. Like the Israelites, we also have been acquitted from the judgment of God not by an animal sacrifice but by the sacrifice of God’s own Son.

Jesus wears His own Hoshen to bring us before God as a memorial. And now we can enter the Most Holy Place freely because we have been acquitted through what Jesus did on the cross. And now as God’s chosen people and holy nation, let us also do our part on bringing the favorable judgment of acquittal to those people that still needs to be rescued from the power of sin.

In summary, the Hoshen or the Priestly Breastplate is indeed a magnificent symbolism of the heart of God and His relationship with His people. As the earthly priest have used the Hoshen to represent before God the people of Israel, and now we as God’s priest must also use our spiritual Hoshen whenever we come in the presence of God to bring unto Him the people in our lives that still needs to receive the salvation that God is offering through Jesus.