The Benefits of Myrrh Essential Oil 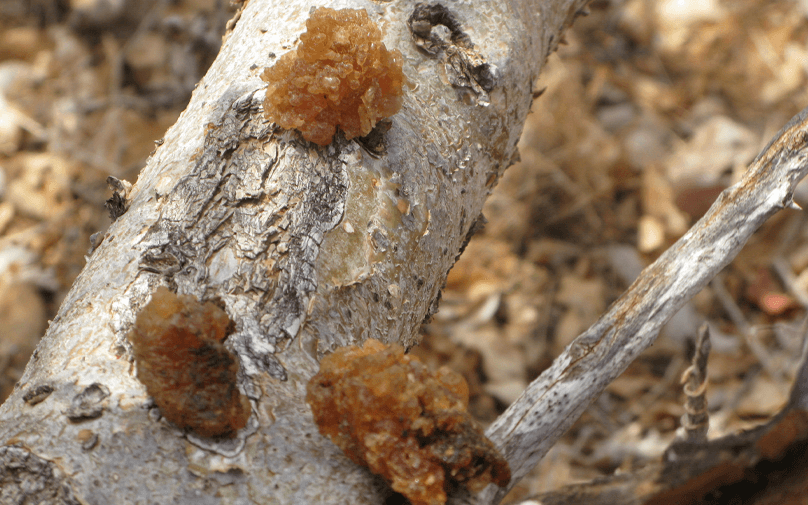 Most of us have heard of myrrh fragrance oil. According to Bible stories, it is one of the gifts (along with gold and frankincense) the three wise men offered the infant Jesus. But do you know why frankincense and myrrh were used and well-regarded for more than 5,000 years? Well before science confirmed it, the wise men knew about the health properties, benefits and uses of this sacred oil.

What Is Myrrh Fragrance Oil?

This resin, or sap-like substance, comes from the Commiphora myrrha tree commonly found in Africa and the Middle East. Botanically related to frankincense, it is one of the most widely used essential oils in the world. The myrrh tree stands out with its white flowers and knotted trunk. At times, it only has a few leaves because of the dry desert conditions. The harsh weather and wind also can cause it to take on an odd, twisted shape.

Myrrh is harvested by cutting into the tree trunks and releasing the resin. As the resin is allowed to dry, it starts to resemble tears all along the tree trunk. Next, the resin is collected and the myrrh fragrance oil is made from the sap through steam distillation.

Myrrh oil has a warm, earthy and balsamic aroma that’s hard to describe but easy to recognize. The oil is yellowish orange and has a sticky consistency. It is frequently used as a base for perfume and other fragrances. In the past few decades, more studies have been done on the uses and benefits of myrrh. Results have shown its capabilities on the hormonal, immune and nervous systems and the skin.

Many find Myrrh oil to have a calming effect on the body and mind, this is why it is such a wonderful substance to have in your anointing oil. It has been known for centuries to have an linctus action which makes you breath easier. Finally, many believe myrrh to have properties to eliminate toxins from the system. All these qualities made myrrh essential a beneficial oil for prayer and meditation.

Myrrh and frankincense oil can be used by applying it topically. Put it directly on your skin to get the benefits of its healing and rejuvenating properties. You can use it full strength or mix it with carrier oils. Myrrh fragrance oils blend well with lavender, frankincense, sandalwood and all the spice oils.

Myrrh fragrance oil has a long history of medicinal uses. It is valued for its wound-healing properties and the Egyptians used it to treat hay fever and heal herpes. Myrrh also has been used as incense and a spice, in religious rituals and ceremonies and to purify the dead.

Some common myrrh oil uses include:

·         Maintains healthy skin. Myrrh may prevent the signs of aging and soothes cracked or chapped skin. It is a common ingredient in many skin care products.

·         Can be used as mouthwash to eradicate infections

Some of the benefits of myrrh fragrance oils may be that it can:

·         Increase the function of white blood cells. It also may help reduce the occurrence of ulcers and improve their healing time.

·         In addition to its physical benefits, myrrh may also yield emotional, mental and spiritual benefits. It affects our sense of maternal connection and healthy attachment, especially when it involves relating to trust, abandonment and traumatic issues.

Where to Find Myrrh Fragrance Oils