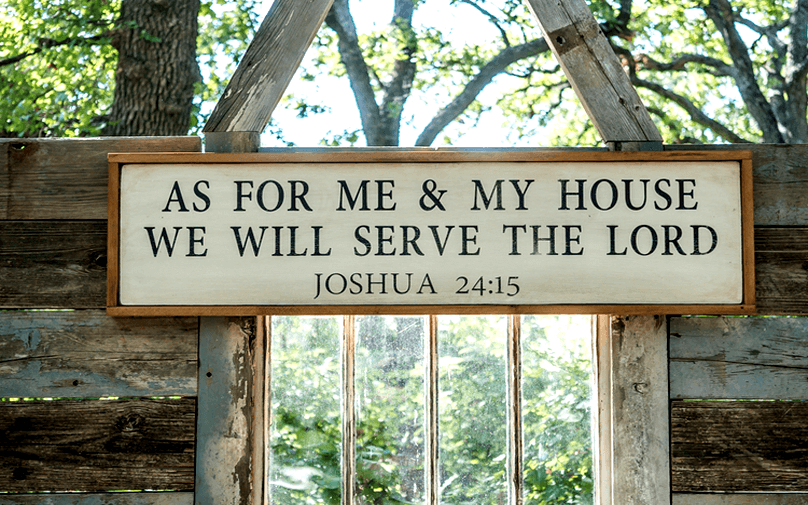 Joshua said to all the people, “This is what the LORD, the God of Israel, says: ‘Long ago your ancestors, including Terah the father of Abraham and Nahor, lived beyond the Euphrates River and worshiped other gods. (v. 2)

Reading the Scriptures will give you an idea that people has the propensity to worship other false gods even if the Lord already revealed Himself to them. The Israelites, being the chosen nation of God, has been subjected to this sin over and over again. And at the end of the life of Joshua, he let the people of Israel choose between serving the Lord and other pagan idols.

By analyzing the history of Israel deeply, we can see some truth regarding the aspect of idolatry and God's unending grace for His people. At the same time, we need to understand how it applies to us in the modern time.

1. The ancestors of the Israelites worship other gods

“Long ago your ancestors, including Terah the father of Abraham and Nahor, lived beyond the Euphrates River and worshiped other gods.” (v. 2)

Before God intervened, Abraham was living his life according to the culture of Ur of the Chaldees and was also worshiping false gods. It speaks of the truth that the forefathers of the Lord’s chosen nation are also committing the grave sin of idolatry because they do not know the true God, which is the LORD.

In our modern time, before God called and lead us into His presence and brought us at the feet of the cross to receive Jesus, we are also idol worshippers. It may not be a physical idol, but we are putting other things ahead of God such as our worldly dreams, money, fame, and power. Apart from God, we tend to find other things to lay our life down. We are trying to fill the God-shaped vacuum in our hearts with our own man-made idols just like the ancestors of Israel.

2. God showed His grace to Abraham by taking him out

“But I took your father Abraham from the land beyond the Euphrates and led him throughout Canaan and give him many descendants.” (v. 3a)

In spite of Abraham’s worship of false gods, God poured out His grace unto him by taking him out of his father’s household and bringing him into the land of Canaan. Take note that the Bible said that God “took” Abraham. It means that Abraham did not pursue God out of his own decision because he would never come out of his sinful state. God’s act of snatching Abraham is God’s unmerited favor in action, justifying the ungodly out of His own will.

It's the same with us. No matter how great our sins are, the Lord is gracious enough to let us into His presence once we accepted His invitation to enter our lives. Thinking about it, Abraham had a choice whether to accept and believe God's promise or to reject it altogether. The same option is also presented to all people. We have the choice to accept God's free gift of salvation or to refuse it and continue living in our sin.

3. God has been faithful in His promises

“So I gave you a land on which you did not toil and cities you did not build; and you live in them and eat from vineyards and olive groves that you did not plant.” (v. 13)

The history of the ancient Israel is all about God fulfilling His promises to Abraham and His descendants. As He promised on oath to His friend, Abraham, God drove out the inhabitants of the land to make room for the Israelites. He sent the hornet ahead of them, and despite their smaller numbers compared to the combined power of all the nations of Canaan, they were still able to subdue it and occupy the Promised Land.

God will also do the same thing in your life. Whatever promises you have received from Him, they are all “Yes” in Christ. The Lord is faithful enough to carry into completion all His promises not just in this life, but in the life to come.

4. Some of the Israelites still worship idols

“Now then,” said Joshua, “throw away the foreign gods that are among you and yield your hearts to the LORD, the God of Israel.” (v. 23)

It is a curious fact that in spite of everything that God has done for the nation of Israel, there are still some of them who were keeping foreign gods in their households. This detail shows that the tendency to commit that grievous sin was not entirely eradicated in the lives of the Israelites. The sin of their ancestors still remained in the time of Joshua, and in fact, throughout the entire Bible. The sin of idolatry caused them to get scattered and exiled by the Assyrian and Babylonian Empire.

The same with them, despite our relationship with God, there are still areas in our lives that are not fully submitted to His Lordship. We are keeping foreign gods in our households. However, just like what Joshua said, we must get rid of this filth in our hearts and yield it to the One who loves us so much.

5. The ultimate choice between the Lord and idols rest in their hands

“But if serving the LORD seems undesirable to you, then choose for yourselves this day whom you will serve, whether the gods your ancestors served beyond the Euphrates, or the gods of the Amorites, in whose land you are living. But as for me and my household, we will serve the LORD.” (v. 15)

The choice between serving God or our idols rest in our hands, just like the Israelites and just like with Abraham. The Lord will give us an invitation or a command to leave our old lives, but the choice whether we will trust and obey Him – just like Abraham did – still rests with us. Joshua and his household made the right choice. The question now is the same for you. Whom will you serve?