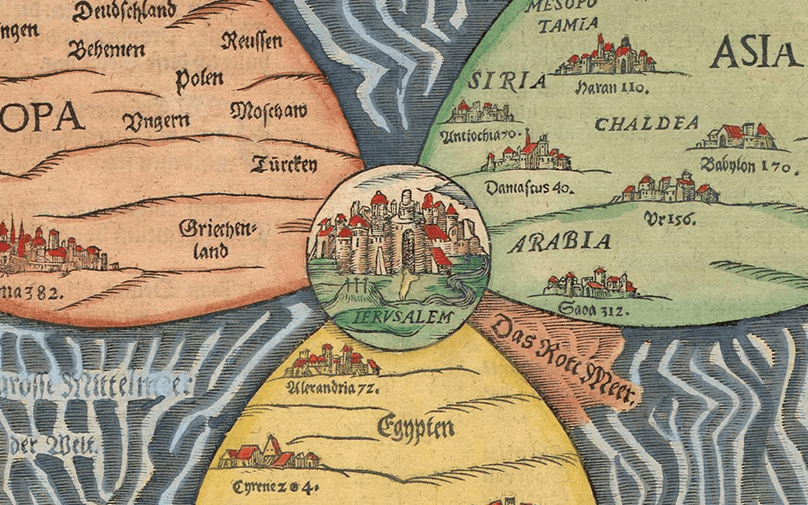 “This is what the Sovereign LORD says: This is Jerusalem, which I have set in the center of the nations, with countries all around her.” (v. 5)

Jerusalem was, and continues to be, the most important city for the people of God. It is the place where the Temple of God and situated to which the Lord chose to dwell and put His Name. Jerusalem is a city that is built on a hill; therefore, all the people from the surrounding nations can catch a glimpse of this place. And as the Bible said, God made placed Jerusalem in the center of the nations. It’s as if, this city is God’s Apple of the Eye.

However, in spite of God’s special favor for Jerusalem, its inhabitants committed a grave sin against God – sins that were worse compared to the nations around them. This chapter in the book of Ezekiel highlights some important points about our unique place in the world through God's favor on us.

1. God exalts us in the eyes of others

“This is Jerusalem, which I have set in the center of the nations, with countries all around her.” (v. 5)

Jerusalem is a vital city, not just for the people of God, but also for the nations around it. Since God put it in the center of these heathen nations and also on top of a hill, it is strategically located to exert a significant amount of influence to its neighboring countries. And if Jerusalem stayed on the path that God has chosen for it, then perhaps they were able to stir up a godly revolution that will consume other people who don't believe in the Lord. It is one of the greatest privileges and opportunities given by God to His people.

Jesus preached the same sentiment for the believers of God. He said, “You are the light of the world. A town built on a hill cannot be hidden... In the same way, let your light shine before others, that they may see your good deeds and glorify your Father in heaven.” (Matthew 5:14, 16) Every Christian is mandated by God to shine His light into all nations. Our titles as “Believers” are not just a term used to describe us, but rather a calling to help other people believe in God also.

When you committed your life to God, He put you in the center of the nations. And just like Jerusalem, you have a divine duty to extend your influence on those people who still don’t have a relationship with the Lord.

2. We have a tendency to commit a greater sin

Jerusalem was called to shine. However, Jerusalem failed miserably in this mission. Instead of being a beacon that will shine the light of God to the nations engulfed in the darkness of idolatry, Jerusalem conformed to the evil practices of the nations around it and worse, it surpassed the wickedness of the pagan nations surrounding it.

Though ignorance of the Law is not an excuse for committing sin, the fact that Jerusalem knows the Law really well made them responsible for a greater sin.  In addition to the Law, God also revealed Himself multiple times to the Israelites, and He made it clear to them His commands and decrees through the prophets that He raised up. In fact, Ezekiel warned them multiple times about the coming wrath, but they still refused to obey God.

We, as modern Christians, also have the propensity to commit sin against God. The worst part is we all know the commands of the Lord because of the Bible, yet if we still choose to rebel against Him, then we are also guilty of a much greater sin.

3. God will punish us more severely compared to those who don’t know Him

“Therefore this is what the Sovereign LORD says: I myself am against you, Jerusalem, and I will inflict punishment on you in sight of the nations.” (v. 8)

The sins of Jerusalem did not go unpunished. The LORD allowed the Babylonian army to besiege them and destroyed the city. They also took the inhabitants of the land as exiles to Babylon and a lot of people have been killed. The prophecies of Ezekiel about shaving his head is a direct allusion to the truth that God will cut off His people like a sword. And as the hair is the crowning glory of man, the crowning glory of God's people which is the city of Jerusalem will also be shaved off by God's wrath.

In our modern time, this must serve as a stern warning to all of us. God is serious in all matters of holiness in our lives. He doesn't want to see us defiling ourselves by worshipping idols or conforming to the patterns of this world. It is humbling to realize that if God didn't spare the precious city of Jerusalem and its inhabitants, God would not also save us if we continuously resist His Holy Spirit's work in our lives.

It is also worth noting that the punishment of Jerusalem was made public. It was done “in the sight of the nations.” As God honored this city by putting it on a hill and making it the center of attention for the surrounding nations, the Lord also made the city a reproach to these nations when He allowed it to be destroyed. The once mighty Jerusalem has fallen and was brought to its knees. The same things could happen to us if we will stray and continue to rebel against the ways of God in our lives.

To properly put things in perspective; In spite of the punishment that Jerusalem received, God still remained faithful to His promises by bringing a remnant to it, rebuilding its wall and the Temple where God's Name dwells. It means that there is always a second chance for any believer of God who chooses to return home to the Lord.