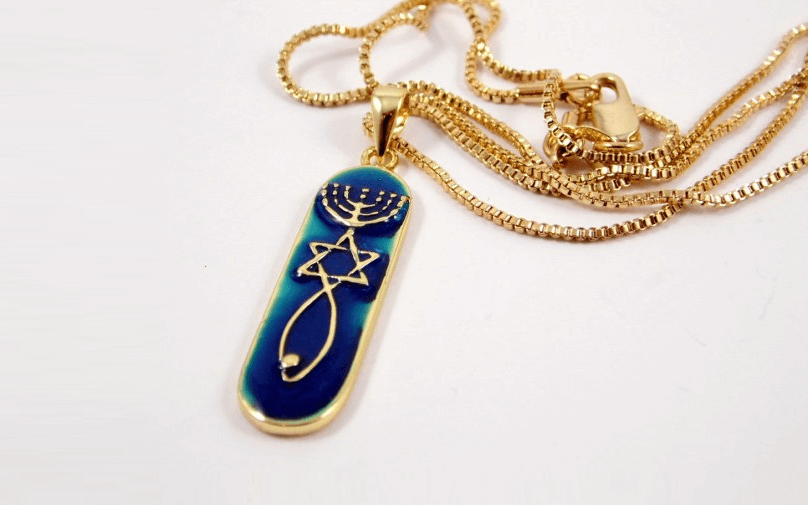 What is the Grafted In?

The Grafted In is considered the oldest Believer symbol. The term ‘Grafted In’ comes from Paul’s letter to the Church in Romans 11:11-24. In Romans 11, verse 19 when Paul states that, “You will say then, ‘Branches were broken off so that I could be grafted in’” he is referring to branch as the Believer and the tree on to which to be grafted as the existing Jewish traditions. This means the Messianic Believer is bound by covenant to Israel. That is why the Grafted In symbol is shaped as a menorah that becomes a Star of David which ends in a fish.

What is the Messianic Star?

The Messianic Star is a popular jewelry design. With a Christian cross in the center, it is another symbol for the Believer who is pursuing their Jewish heritage. This symbol also is a way of recognizing and honoring the history of the Christian religion. It links Christianity to Judaism. It is one living faith of the one and only God.

Here are some Messianic Jewish jewelry selections that allow you to wear your faith.

The man in your life will enjoy wearing a pair of Messianic cufflinks that link the Old and New Testaments, the traditions of Judaism and Christianity. The design on the Grafted In cufflinks merges three traditionally inspirational symbols: the Menorah, the Star of David and the Fish of Jesus. This symbol is also called the Messianic Seal of Jerusalem. This set of rectangular cufflinks are gold filled with a beautiful blue enamel background.

White Gold Filled Shema Yisrael Cufflinks are another good choice. These stunning cufflinks have a distinctive design. Hebrew lettering is artistically drawn in the circular structure for the centerpiece of all Hebrew prayer, the Shema Yisrael. Transliterated, the Shema reads, "Shema Yisrael, HaShem Elokeinu, HaShem Echad." Translated this is, "Hear, O Israel, The Lord is our God, The Lord is One." (Deuteronomy 6:4).

Sterling Silver Grafted In Earrings with Roman Glass feature the Messianic Grafted In symbol. Feminine and iridescent, these earrings are bound to light up the room. Because of the individual oxidation process each piece of glass went through, no two pairs are alike.

Sterling Silver Messianic Star Earrings dangle and have an open hook. The Messianic Star, an image used as an emblem of the Messianic Movement, symbolizes the harmony of Jewish and Christian beliefs.

Wear your faith with a "Yeshua" Gold or Yellow Gold Filled Necklace. A Sterling Silver and Roman Glass Necklace or one that boasts a Jerusalem Cross or a Chai symbol are also good choices.

Roman Glass Silver bracelets are beautiful accessories for any woman. The glass is unearthed in Israeli archeological sites. All settings are made from 925 sterling silver. Choose from round or rectangular stones.