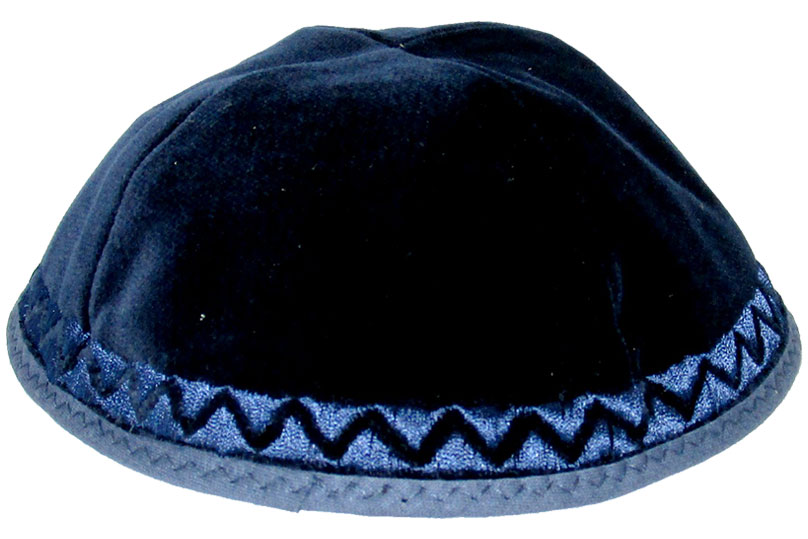 When a person wears a kippah, he creates a certain responsibility to act as a G-d fearing person should act… the kippah helps him to be reminded of this.
The skullcap worn traditionally by Jewish men is known in Hebrew as a "kippah" (KEE-pah) or in Yiddish as "yarmulke" (YAHR-mul-kuh).

It has been proposed that that the word yarmulke is derived from an Aramaic phrase, yarei malka, meaning "fear of the King [i.e. G-d]," or from the Hebrew phrase, ya'arei me'Elokai, "those who tremble before the Lord." On the other hand the Hebrew-language equivalent, kippah, simply means "dome".
Kippot come in a variety of sizes, colors and fabrics. There are no specific rules as to how your kippah should look. There is every style from the plain black velvet kippah to the leather kippot decorated with sports teams’ mascots. The most popular kippah at JesusBoat.com is the knitted kippah. These are available in a variety of colors and designs. Kippot adorned with the Star of David are always a well received choice.

There is no Biblical commandment to wear the kippah. However, the first mention of wearing head coverings as commanded by G-d is noted in Exodus. It was directed that Aaron’s sons be made to wear turbans of linen. The first century historian Josephus described the turbans as a strip of linen 16 cubits long, which was wound aroung the top of the head. After being wound, it was sewn and then covered with a piece of fine linen to hide the seams. The end result was a conical shaped hat which could very well have been the predicessor of how the kippah looks today.

The kippah is traditionally worn by young boys and men as an outward sign of the belief in the G-d above us and identification with the Jewish people. While some wear the kippah all the time, others choose wear kippot only while praying, eating, reciting a blessing, or studying Jewish religious texts. Kippot are also expected to be worn in the synagogue, at weddings, funerals and other life cycle events. Today, even some women choose to wear a kippah.
The kippah tells the world that the wearer is bound by G-d's commandments and lives his life accordingly. There is no reason a non-Jewish man cannot wear a kippah to display faithfulness to G-d and all He commands.