November 29: The Day the World Has Recognized the Jewish State

Among the many significant dates of national and religious holidays and events in modern Israel, one date remains largely overlooked by most of the world, and also the majority of the country's population: November 29. And yet this date is holds great importance in the history of the Jewish state: it is on this date, in 1947, that the world has recognized the Jewish state.

Long before 1947, the Zionist movement has fought for the establishment of an independent Jewish state in the Holy Land. The idea gained growing support among the world's nations after the end of World War II, when the horrors of the holocaust became widely known. And yet, the British Mandate of Palestine regime has enforced restrictions on Jewish immigration to the country. In one infamous incident in 1947, a violent struggle broke out between Jewish holocaust survivors onboard the ship Exodus and British soldiers who were sent to block the ship's path to Israel. One crewmember and two passengers were killed by the soldiers. 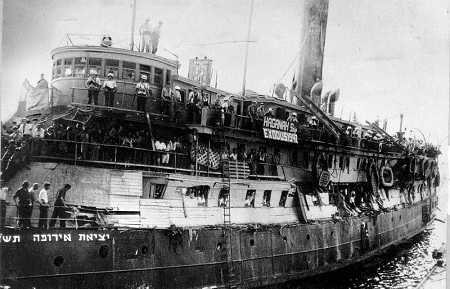 On August 31 of the same year, the UNSCOP committee, charged by the United Nations to determine the future of the land of Israel, has submitted its conclusions. The committee recommended a plan for partition of the country into two independent states – a Jewish state and an Arab state. On November 29, the partition plan was put to vote by the United Nations' general assembly. After a dramatic vote, the assembly has approved the plan, with 33 countries voting in favor of it. 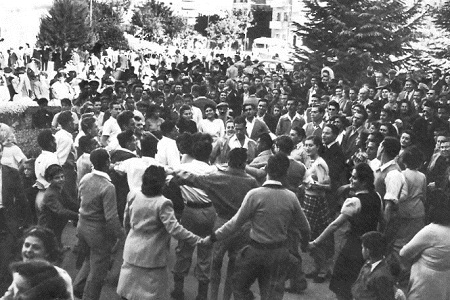 Celebrations in the streets following the UN's resolution. Source: Wikipedia

The day of the vote is remembered by many Israelis as a historical event. Families gathered around radios, listening to the live broadcast, writing down the votes, nervously waiting for the outcome. When news broke out of the partition plan's approval, many got out to celebrate. Even though the partition plan has offered only a small portion of the land of Israel for the Jewish state, at long last the need for Jewish independence in the land has been recognized by the international community. The United Nation's decision was a key stage in the world's recognition of the Jewish state.

The country's Arab population, however, and the neighboring Arab states have refused to accept the partition plan, and the escalating violence has led to Israel's war of independence following Israel's declaration of independence in 1948. Despite the importance of the UN's decision in recognizing the Jewish state, the failure of the partition plan has caused the date of November 29 to remain largely overlooked. Still, it is not uncommon to run across a "November 29" street or square while travelling in Israel, a sign of the day's importance on the way to Israel's independence.

John F. Kennedy's Letter of Support in the Partition Plan