The Journey of Israeli Wine 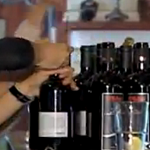 Wine has been produced in Israel since the time of Abraham. This drink was called ‘yayin’ which is described as fermented grapes. Grapes are indigenous to the Promised Land. When Moses’ spies returned from their scouting mission they carried a giant bunch of grapes between them on a rod. This image has endured and becoming the symbol for the Israel Ministry of Tourism.

As grapes are a native product of Israel, it was natural for the Israelites to begin producing wine. Wine became a mainstay of the ancient economy as a local product and an export. The winemaking industry blossomed under King David who employed two wine officials – a viticulturist and an oenologist.

Wine played directly into the religious beliefs of the Israelites. Images of vineyards, grape harvesting and winemaking were used metaphorically to express relationships between God and man such as in Isaiah’s ‘The Song of the Vineyard’, “The vineyard of the Lord Almighty is the nation of Israel, and the people of Judah are the vines he delighted in.” (Isaiah 5:7).

The Romans continued to encourage wine production because a large amount was exported to Rome. Here it was well celebrated; certain winemakers were highly sought after in particular. However, in the Middle Ages sadly, the industry was decimated due to the religious doctrine of conquering forces to the region. The vineyards were destroyed and Israel’s native species of wine grapes were lost forever.

It was not until the late 1880s that Israel began producing wines again. The French Baron Edmond de Rothschild imported grapevine varieties from France and established the first successful modern winery in Israel. Other wineries followed, but all focused on sacramental Kosher wine. The motivation was not regaining the international wine reputation that Israel had in ancient times, but to provide wine for Shabbat and holidays for the Jews rapidly making aliyah to Israel and for exportation to Jewish Diaspora.

A century later, in the 1980s, Israeli wineries finally begin to revive the quality wines revered in ancient times.  In this era many boutique wineries were established as well as a few large wine estates. The 1990s saw Israel wine come into its own. There was an explosion in the establishment of wineries in Israel and the Golan Heights Winery won its first awards in prestigious international wine competitions.

Today there are approximately 300 wineries populating the small landmass of Israel. The country is covered with wineries of every variation. There are kibbutz and moshav wineries, wineries run by Ultra Orthodox Jews and wines produced by Christian Monks. There are large commercial operations which produce millions of bottles and dozens of varieties of wine to small boutique family-run wineries producing just a thousand bottles of a specific variety. There are wineries with state-of-the-art equipment and well-educated oenologists and viticulturists on staff to those with more traditional equipment and self-taught winemakers.

Israel wine has undergone a fantastic journey over the millennia -- Biblical fermented grapes, King David, fame in Rome, dissolution, resurgence and today’s international critical acclaim. The wine industry in Israel continues to evolve such as in developing non-traditional specialty wines like the Rimon Winery’s fantastic pomegranate wines. The metamorphosis of Israel wine is fascinating and inspiring to wine enthusiasts and supporters of Israel alike. It seems there is something for everyone in today’s Israel wine market.