Christmas in the Holy Land

As do Christians the world over, Christians in Israel gather on Christmas Eve and on Christmas day to celebrate the birth of Jesus Christ. Together with some 70,000 pilgrims from every corner of the planet the hold midnight and morning masses and services.

The focus of these celebrations is the town of Bethlehem, the actual birthplace of Jesus, and Nazareth, the hometown of Jesus.

In Bethlehem crowds gather in Manger Square on Christmas eve to partake in the midnight mass. Tickets are required to actually enter the Church of St Catherine's, one of the churches that is part of the Basilica of the Nativity, complex to attend the mass. While they are free, they are also difficult to come by. However, even without entering the Church of St Catherine's the spirit of the Mass can be thoroughly enjoyed. Thanks to modern technology all who gather in Manger Square can watch the Mass broadcast live on the maxi-screens.

Under the Basilica of the Nativity lies the Grotto, this is believed to be the very place of Jesus' birth. Beginning at midnight on Christmas eve a Mass is held in the Grotto every half an hour until 5 pm on Christmas day led by various Christian denominations including Greek Orthodox, Roman Catholic, Protestant, Ethiopian, Armenian and more. In addition to the happenings in Manger Square, several Protestant groups hold services in Shepherds' Fields, the fields where the shepherds witnessed the Star of the Nativity. 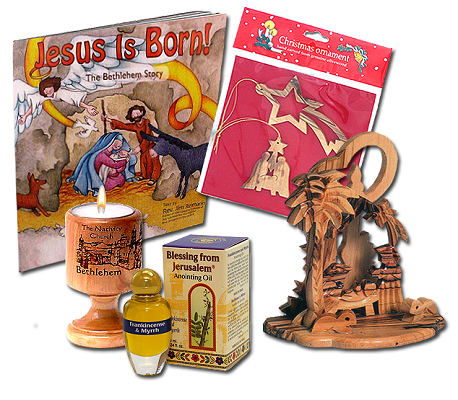 In the Galilee the city of Nazareth also hold extensive Christmas celebrations. On Christmas eve a Christmas parade passed through the streets which kicks off the official holiday celebrations. The parade ends with fireworks and then a street festival complete with a Christmas market is held. In the Basilica of the Annunciation in Nazareth holds a midnight Mass and a Christmas day Mass.

In Jerusalem there is a plethora of Christmas services that can be attended at midnight on Christmas eve and during Christmas day. From the grandiose setting in the Basilica of the Holy Sepulchre to the humble YMCA, there are services in almost any denomination desired. Pilgrims spending Christmas in Jerusalem will definitely not be wanting for Christmas celebrations.

However, Christmas Mass and services are not limited to just these major holy cities. Across Israel on Christmas eve and day there are services to attend.  Tiberias, Tel Aviv, Eilat, Haifa, Beersheva and at least 25 other cities have at least one (often more) Christian institution which hold Christmas celebrations.

In the Holy Land, where is all began, on Christmas there is song and celebration, there is joy and prayer as the faith come to observe the birth of Jesus. They are here in this ancient place withing communities that have existed for thousands of year, but they are looking to the future to find the peace that Christmas promises.