How to Hang the Mezuzah... 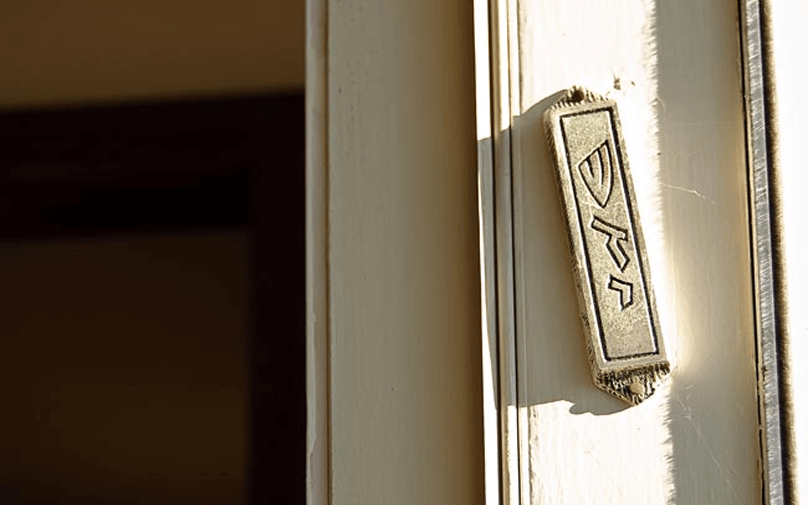 The Mezuzah is one of the most enduring relics of the Jewish faith and was traditionally passed down from generation to generation. It is composed of a folded parchment where a portion of the Torah is written. The verses written include Deuteronomy 6:4 – 9 and Deuteronomy 11:13 – 21.

Essentially, the Torah passages are God's command to the Israelites to love Him with everything that they are. It also includes the promises of God and the punishment that His people will receive when they disobey God. This parchment will be inserted in a decorated case and then place in a prominent place in house's doorframe. It seems straightforward, but just like the other traditional relics of the Jewish faith, there are a lot of customs and regulations that must be observed when hanging the Mezuzah.

1. Customs before hanging the Mezuzah

When it comes to religious relics in the Jewish faith, you must ensure that you follow the specific rules and guidelines given in the Scriptures or the prescription of the Jewish traditions. Here are some of those policies before hanging the Mezuzah:

The parchment must contain 22 lines of writing. A single mistake, even if only one letter is missing, will make the Mezuzah unusable.

The Mezuzah must never be photocopied or printed from the computer; a kosher scribe, which is known as a sofer, must always write it manually using a special pen and ink. The letters in the parchment must always be written according to halacha (Jewish Law)

Unlike a Torah Scroll that must always be copied from another manuscript, the Torah passages in the Mezuzah may be written from memory by a sofer.

Place the parchment in front of you – that is, the text of the Shema must face you. Roll the Mezuzah from left to right so that the text will be inside the parchment.

Place the rolled Mezuzah in a protective covering like wax paper to protect the parchment.

When putting the Mezuzah in the case, make sure that God’s Hebrew Name Shaddai must face outward.

2. Customs when hanging the Mezuzah

Upon ensuring that the Mezuzah to be fastened in the doorframe satisfied the previous requirements, the conditions when hanging it must also be followed. Here are the instructions in hanging the Mezuzah in your home.

The Mezuzah must be hung on every doors and gate of all residential buildings. These doors include all the entrances to any rooms that are used for living purposes. However, doors of bathrooms, schools and even a house of worship are excluded.

When the Mezuzah is being affixed to the door, the following benediction must be recited:

“Blessed art Thou, O Lord our God, King of the Universe,

Who hast sanctified us by Thy commandments and hast commanded us to fasten the Mezuzah.”

The Mezuzah must be placed at the upper portion of the right door frame and with a slightly slanted position. And should also be permanently affixed using glue, nails, and screws.

3. Requirements when the Mezuzah is already hanging on the door

After affixing the Mezuzah in the doorframes of your house or any rooms inside, there are also conditions that you must fulfill and consider.

Every time that you are passing through a door where there is a Mezuzah, you must stop to touch and kiss the word Shaddai and recite the following prayer:

“May God keep my going out and my coming in from now on and even more.”

When a house is sold to another observant Jewish believer, the Mezuzah can be left to the new owners until they buy their own Mezuzah. If a Jewish believer would not own the house, then every sacred object in the house must be removed to avoid being desecrated.

The Mezuzah must be regularly checked by a kosher scribe to see if there is a need to replace it. Common grounds to determine if the Mezuzah needs to be replaced are broken parchment and erased letters in the Torah passages.

4. The Identity of a Jewish home using a Mezuzah

The use of Mezuzah in a house or room signifies that the occupants of the house are believers of the Jewish faith. By affixing a Mezuzah in front of the house, it speaks of the truth that the individuals who are living inside believes in God of the Bible and is under the protection of Him.

In addition to that, a house with a hanging Mezuzah also empowers the belief of the people living in it that they have a unique identity in God. They acquire the pride of being the apple of God’s eye and being included in the people of God.

However, more than the recognition that can be attributed only to God’s people, hanging a Mezuzah in front of a house or room invokes the responsibility to obey God. Having the Greatest Commandment of God prominently placed in your house gives you the blessing, and at the same time the duty to obey it with all of your being. Therefore, as you declare outwardly to the people who see the Mezuzah in your house that you are a follower of God, then let the truth of the Torah passages written in that small parchment be real in your life.

5. Extending the impact of the Mezuzah even outside your house

The responsibility to obey God doesn’t end upon leaving the house where there is a Mezuzah. Remember that what the Mezuzah wants to teach you is to develop an awareness of God's presence and your basic duty to obey His commands. The purpose of the Mezuzah will be defeated if you won’t live in a way that displays your commitment to God. As the chosen people of God, let the Mezuzah help you in proclaiming God’s goodness and let your deeds be a form of evidence that you are indeed a follower of the Lord!