Ginosar – The Home of Jesus Boat

The Jesus Boat website is named after a boat that was discovered in 1986 at the Sea of the Galilee, now preserved and presented in the exhibition in Kibbutz Ginosar. Like many others of its kind, Kibbutz Ginosar is a place that warmly welcomes visitors, and its deep connection to history of Christianity is well worth examining. 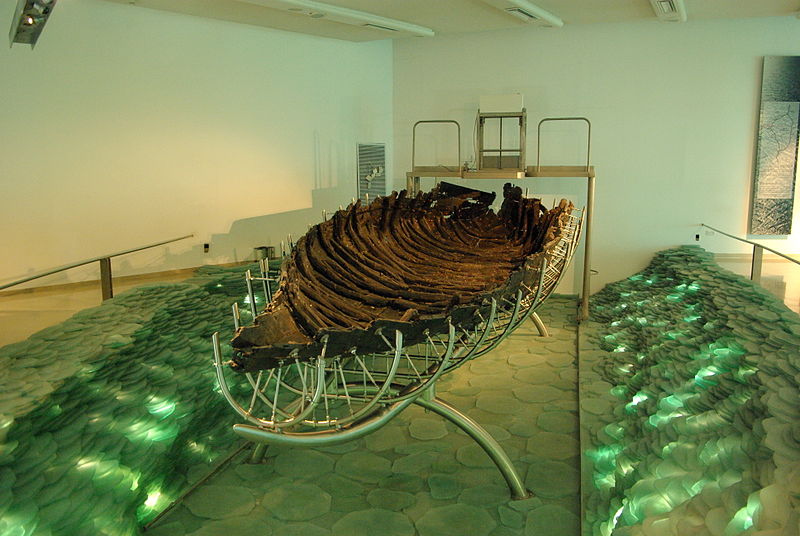 The Boat at the Kibbutz Museum. Image Source: Wikipedia

The name Ginosar is the Hebrew pronunciation of the name of the ancient town Gennesaret, which has been described by Josephus Flavius, the famous Holly Land historian, as a place of fertile soil (in its Hebrew version, the name Ginosar means "rich garden"). The town is mentioned several times in the New Testament, for example in the Gospel of Luke:

"So it was, as the multitude pressed about Him to hear the word of God, that He stood by the Lake of Gennesaret, and saw two boats standing by the lake; but the fishermen had gone from them and were washing their nets. Then He got into one of the boats, which was Simon’s, and asked him to put out a little from the land. And He sat down and taught the multitudes from the boat" (Luke 5: 1-3).

The Kibbutz was founded in 1937 by idealist Zionist youth, and was named after the ancient city. Its most famous resident, Yigal Alon (1918-1980), was one of the Israeli Army's most notable commanders and a prominent minister in Israel's governments. Despite being surrounded by hostile population in its initial years of existence, Kibbutz Ginosar quickly gained a reputation for the warm hospitality that it provides for travelers. Among the many people hosted by the Kibbutz was Hannah Szenes, who later became a symbol of heroism for Israeli youth when she joined a daring mission behind the enemy lines during World War II, from which she did not return. Szenes stayed at the Kibbutz during a trip at the area in 1940, and described in her diary how impressed she was with the resident's struggle.

In 1986, two brothers from the Kibbutz have discovered the remains of the ancient boat on the northwest shore of the Sea of the Galilee. 27 feet long and 7.5 feet wide, the boat was constructed of ten different kinds of wood, and was meant to allow fishing close to the shore. The extraction and preservation process of the boat was long and complex, and now it can be seen at the Kibbutz's museum.

It was the dating of the boat using radiocarbon dating which brought the real exciting news: the boat dates back to the time of Jesus Christ. Indeed, it fits the many description of boats from the Holy Scriptures, as the one mentioned in the Gospel of Luke. A sign that the boat relates to sacred times was given at the time of its discovery: the two brothers who discovered the boat reported seeing a double rainbow in the sky on the same day.

If you are traveling in Israel, your trip cannot be complete without a visit to the museum where the boat is presented. The Kibbutz is also where the management of the Jesus Boat website resides, close to boat that it is named after, which symbolizes the deep connection between Christian faith and the Holy Land.