Biblical and Modern Significance of the Dove of Peace 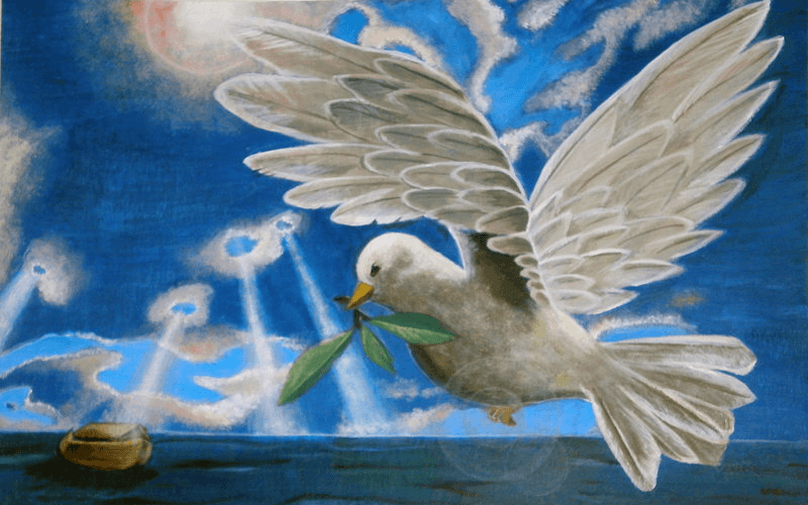 The Biblical and Modern Significance of the Dove of Peace

One of the most common species of bird, doves can be found anywhere on earth except for those highly dry places like the Sahara desert and the continents of Antartica and Artic. Although the dove has already adapted to the human community and can be seen normally in various cities worldwide, this bird has a prominent place in the context of Biblical history. In the Bible, there are two major events where this ‘common’ bird has been given an important role in the narrative of the scripture. Let’s look at them shortly:

1. The Dove after the Flood in the time of Noah

God has decided to destroy the whole world through a great flood. Only Noah and his family along with the animals that were in the ark were saved. It rained for 40 days and 40 nights which cause the flooding of the earth and killing everything that has breath except for those who are in the ark. After the rain stopped and a few months, Noah sent a dove to check if the land has already dried. And as the dove returned, with a freshly plucked olive leaf, it brought great news to Noah that the water is receding.

“This time the dove returned to him in the evening with a fresh olive leaf in its beak. Then Noah knew that the floodwaters were almost gone.” Genesis 8:11 (NLT)

2. The Holy Spirit descended on Jesus in the form of a Dove

After 30 years of living obediently to His earthly parents, Jesus will now start His public ministry. Before the testing in the wilderness, He went to John the Baptist to be baptized in the Jordan River. And in that place the Spirit of God descended on Him in the form of a dove.

“Then John testified. “I saw the Holy Spirit descending like a dove from heaven and resting upon him.” “ John 1:32

In another place in the Bible, Jesus commanded that we should be ‘innocent as doves’. Doves, indeed, are one of the famous creations of God based on the portions of Scriptures where it was mentioned. So, what could be the Biblical significance of this bird and how it relates to us today?

1. Dove as a Symbol of Hope

Being trapped inside a huge ark with nothing but a few of your family members and a great number of animals could be a really depressing experience. Add to this situation the knowledge that every person, acquaintances, friends, relatives and your own family, outside the ark are perishing because of the flood then you get a very stressing train of thoughts. Can you imagine being there?

After many months have passed, Noah and his family were facing a very uncertain future. But when the dove returned from its scouting outside the ark bringing that green and fresh olive leaf, all of them were filled with hope! There is a bright future waiting for them. Like Noah, let the doves remind us that with God, there is always hope. As the psalmist declares in Psalm 62:5, “Yes, my soul, find rest in God; my hope comes from him.”

2. Dove as a Symbol of Peace

Peace is one of the most common symbolism that being associated with the dove. Compared to other birds like the hawk, raven or eagle, the dove indeed is a very peaceful bird. It could co-exist with human without harming each other. The history which resulted to the dove becoming a symbol of peace is quite unusual. According to studies, a white dove with an olive leaf in its beak combined two symbolisms from Christianity and western civilization. The white dove to portray Christ’s baptism and the olive leaf which represents peace in the culture of Greek and Romans. Still, for us today, we should always remember one of the gifts of the Holy Spirit which is peace.

3. Dove as a Symbol of Innocence

Matthew 10:16 quotes Jesus saying: “I am sending you out like sheep among wolves. Therefore be as shrewd as snakes and as innocent as doves.” The original Greek word for ‘innocent’ is “Akeraios” which literally means ‘unmixed’ which could be figuratively translated to innocent or harmless. Basically, Jesus is saying to his disciples that they should be pure, not contaminated with sin and evil desires, being wholly filled of God’s desire within them. Innocence in the context of this verse means that we as Believers should not participate in the deeds of darkness and be completely consumed with the passion to serve God, to do good to others and to spread the Gospel, to be innocent like doves.

4. Dove as a Symbol of the Holy Spirit

This symbolism directly derives its origin from the accounts of Jesus’ baptism early in His ministry. The Holy Spirit came down to Jesus in a form of a dove. This is a very beautiful picture of the dynamic of the Trinity where God the Father, the Son and the Holy Spirit is at work. God’s Spirit descending on Jesus has empowered Him to go thru the ordeal of the testing made to Him in the desert. We can see here that despite the generally peaceful ideas connected with the Holy Spirit, it is also the same spirit that gave Jesus the power that He needs. As well as for the believers, in Acts, we read about how the Holy Spirit came upon the early disciples that enabled them to speak in tongues.

In the context of this symbolism, we as Believers should always abide by God’s Spirit. God’s empowerment can also be given to us. The Holy Spirit can also descend on us and live in us, maybe not in the visible form of a dove but in the form of anointing and blessing.

In summary, the symbolism connected to the dove can be used as a reminder for us to live a life that is according to God’s will. The character of hope, peace and innocence should be a defining trait of any Believer living in step of the Spirit.