A Tradition of Jewish Heroism: The Story of Yad Mordechai

One name that's often repeated  among the recent reports of Israeli cities and towns under rocket fire during Operation Protective Edge is that of Yad Mordechai, a Kibbutz in south Israel near the city of Ashkelon. The story of the Kibbutz brings together two important stories of Jewish heroism.

The Kibbutz was founded at the end 1943 by a group of young idealist Jews who came to the Holy Land from Poland. Several months earlier, the Jews who trapped by the Nazis at the Warsaw Ghetto in Poland rebelled against the attempt to send them to the death camps, and in a brave uprising managed to stall the Germans' plan. Eventually, however, the Ghetto was destroyed, 13,000 Jews were killed during the uprising and the remaining 50,000 Jews were sent to the camps. Inspired by the heroic story of their brothers, the founders of the Kibbutz decided to name it Yad Mordechai after Mordechai Anielewicz, the leader of the uprising whose name became a symbol for Jewish heroism to this very day. 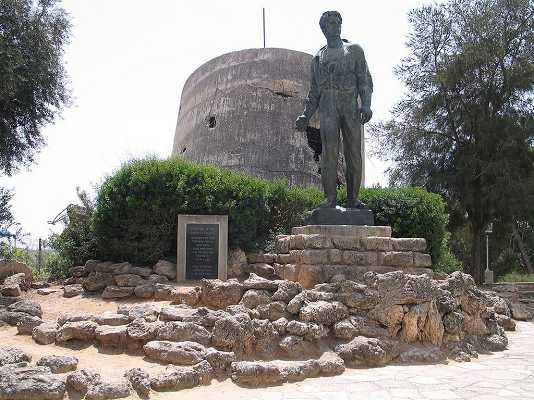 In its first few years the Kibbutz thrived, and its residents had good relationship with the surrounding Arab villages. But following the United Nations' 1947 decision to support the establishment of a Jewish state in the Holy Land, relationship turned extremely hostile. Arab shooters frequently opened fire on the Kibbutz's vehicles and the Kibbutz's relatively remote location made contact with central Israel difficult. The Kibbutz's members became dependant on armored convoys for supplies, and the last such convoy arrived at the eve of Passover 1948, carrying not only weapons and food but also materials for the Passover Seder. The Kibbutz members began fortifying their home, knowing that it would soon become a battleground.

On May 14 of the same year Israel declared its independence, and all its surrounding Arab nations declared war on the young state. Five days later, Egyptian forces stormed Yad Mordechai. For five days the brave defenders of the Kibbutz, armed with light weapons, managed to hold back the invading Egyptian forces. Early in the morning of May 24, realizing that they can no longer stand against the enemy, the Kibbutz's defenders retreated.

The cost of defending the Kibbutz was high, with 26 of the defenders killed. But despite the retreat, the defenders' brave standing was not in vain. The Egyptian Army intended to take over the Kibbutz in a few hours; the fact that the defenders managed to delay it by several days gave the entire state of Israel and its newfound army a chance to supply and prepare itself for coming battles, and eventually emerge victorious. In October of 1948, IDF forces took back the Kibbutz. Yigal Alon, the commanding officer of the war's Southern Front, personally greeted the Kibbutz members upon their return to their homes.

The story of Yad Mordechai is one that links Jewish bravery and heroism both in and outside the Holy Land. The Kibbutz commemorates this heroism with the impressive statue of Mordechai Anielewicz, set near the historical water tower bombed by the Egyptian army, and with a special site that recreates the historical battle during Israel's War of Independence.