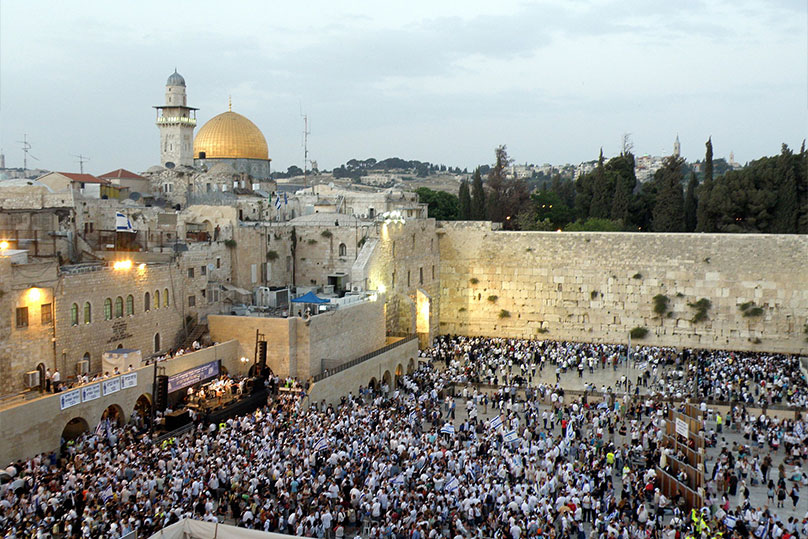 Jerusalem Day is celebrated on the 28th of Iyar (mid to late May).  This is the day that East Jerusalem was liberated by the Israel Defense Forces.  This day symbolizes the historical connection of the Jewish people to Jerusalem.

From the inception of the State of Israel until the Six Day War in 1967, Jerusalem was a divided city.  The western part was in Israel's control and the eastern side was governed by Jordan.  When Israel was attacked during the Six Day War, the army fought back and was able to capture East Jerusalem.  It was a miracle!

This capture was very significant as the Old City and the Kotel (Western Wall) are located in the eastern part of the city and the Jewish city was now tripled in size.  The soldiers that reached the Kotel were very emotional as they were the first Jews to be at the Kotel in 19 years.  The paratroopers commander, Rabbi Mordechai Gur made the famous quote "The Temple Mount is in our hands" and blew the shofar.

Watch these videos which contain the IDF wireless radio transmissions from the liberation of the Old City. Listen carefully and you will hear the commander's orders, boots on the pavingstones, sounds of gunfire, the tears of the soldiers at the Western Wall and the blowing of the shofar for the first time in longer than anyone's memory. Below the videos is a translation of the action.

Colonel Motta Gur [on loudspeaker]:All company commanders, we're sitting right now on the ridge and we're seeing the Old City. Shortly we're going to go in to the Old City of Jerusalem, that all generations have dreamed about. We will be the first to enter the Old City. Eitan's tanks will advance on the left and will enter the Lion's Gate. The final rendezvous will be on the open square above.

[The open square of the Temple Mount.]

[ Sound of applause by the soldiers.]

Yossi Ronen: We are now walking on one of the main streets of Jerusalem towards the Old City. The head of the force is about to enter the Old City.

Yossi Ronen: There is still shooting from all directions; we're advancing towards the entrance of the Old City.

[Sound of gunfire and soldiers' footsteps.]

[Yelling of commands to soldiers.]

The soldiers are keeping a distance of approximately 5 meters between them. It's still dangerous to walk around here; there is still sniper shooting here and there.

We're all told to stop; we're advancing towards the mountainside; on our left is the Mount of Olives; we're now in the Old City opposite the Russian church. I'm right now lowering my head; we're running next to the mountainside. We can see the stone walls. They're still shooting at us. The Israeli tanks are at the entrance to the Old City, and ahead we go, through the Lion's Gate. I'm with the first unit to break through into the Old City. There is a Jordanian bus next to me, totally burnt; it is very hot here. We're about to enter the Old City itself. We're standing below the Lion's Gate, the Gate is about to come crashing down, probably because of the previous shelling. Soldiers are taking cover next to the palm trees; I'm also staying close to one of the trees. We're getting further and further into the City.

Commander eight-nine here, is this Motta (Gur) talking? Over.

[Inaudible response on the army wireless by Motta Gur.]

Uzi Narkiss: Motta, there isn't anybody like you. You're next to the Mosque of Omar.

Yossi Ronen: I'm driving fast through the Lion's Gate all the way inside the Old City.

Command on the army wireless: Search the area, make sure to enter every single house, but do not touch anything. Especially in holy places.

Uzi Narkiss: Tell me, where is the Western Wall? How do we get there?

Soldiers: [reciting the 'Shehechianu' blessing]: Baruch ata Adonai, elokeinu melech haolam, she-hechianu ve-kiemanu ve-hegianu la-zman ha-zeh. [Translation: Blessed art Thou Lord God King of the Universe who has sustained us and kept us and has brought us to this day]

[Soldiers sing 'Hatikva' next to the Western Wall.]

Rabbi Goren: We're now going to recite the prayer for the fallen soldiers of this war against all of the enemies of Israel:

[Translation: Merciful God in heaven, may the heroes and the pure, be under thy Divine wings, among the holy and the pure who shine bright as the sky, and the souls of soldiers of the Israeli army who fell in this war against the enemies of Israel, who fell for their loyalty to God and the land of Israel, who fell for the liberation of the Temple, the Temple Mount, the Western Wall and Jerusalem the city of the Lord. May their place of rest be in paradise. Merciful One, O keep their souls forever alive under Thy protective wings. The Lord being their heritage, may they rest in peace, for they shalt rest and stand up for their allotted portion at the end of the days, and let us say, Amen.]

[Soldiers are weeping. Rabbi Goren sounds the shofar. Sound of gunfire in the background.]

Jerusalem Day is marked with ceremonies honoring the city and the soldiers that died during its capture.  There are special prayers which thank G-d for returning the city back to us after 2,000 years.  There is special television and radio programming and the day is celebrated in schools around the country.

The day is most famous for the Jerusalem Day Parade when thousands of Israel youngsters dressed in blue and white march down the streets of Jerusalem towards the Kotel waving Israeli flags.  Watch this video of the parade:
Back to Jewish Holidays