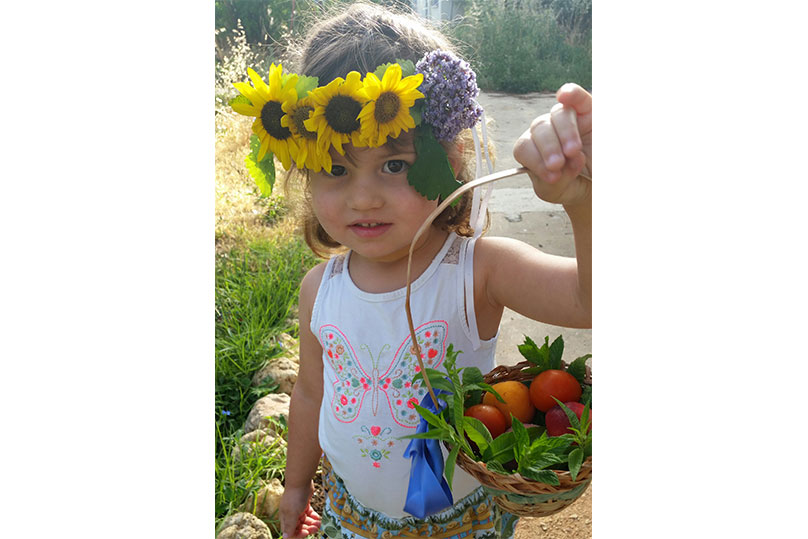 Shavuot, the Holiday of Weeks, is observed seven weeks from the first day of Passover. This time is called the Counting of the Omer. Shavuot commemorates the Giving of the Torah to Moses at Mount Sinai. According to tradition it was on this day that the Torah was given to the Jewish people at Mt. Sinai. The Torah tells us it took precisely forty-nine days for the Israelites to travel from Egypt to the foot of Mount Sinai. This is where the Counting of the Omer originated.

In Biblical times, Shavuot honored as the first day on which individuals could bring Bikkurim or first fruits to the Holy Temple in Jerusalem. The Bikkurim consisted of the Seven Species of Israel: wheat, barley, grapes, figs, pomegranates, olives and dates. There was much fanfare while bringing Bikkurim to Jerusalem. The Seven Species were placed in fancy baskets and then on carts in which the animals and the cart were decorated with flowers. As these carts passed through villages they would be accompanied by music and parades. At the Temple the Bikkurim would be presented in a kohen in a ceremony. All of this is done in accordance to the description found in Deuteronomy 26:1-10.

These delightful traditions are kept alive today in modern Shavot celebrations. While the Bikkurim are no longer taken to Jerusalem, agricultural communities, kibbutzim and moshavin, across Israel hold parades and special ceremonies to celebrate the crops produced in the fields of Israel. These crops are taken to the parades and given away to all who attend in a manner of Bikkurim. Additionally, agricultural machinery is put on display and to show the modern progress and success of the Israeli farmer.

If you happen to be visiting Israel during Shavot it is worthwhile to see if you can attend a Bikkurim ceremony on a kibbutz or moshav. The ceremonies held are beautiful and fun with folk singing and dancing, musical performances and a parade of farm produce and equipment. It would definitely be an experience to remember!