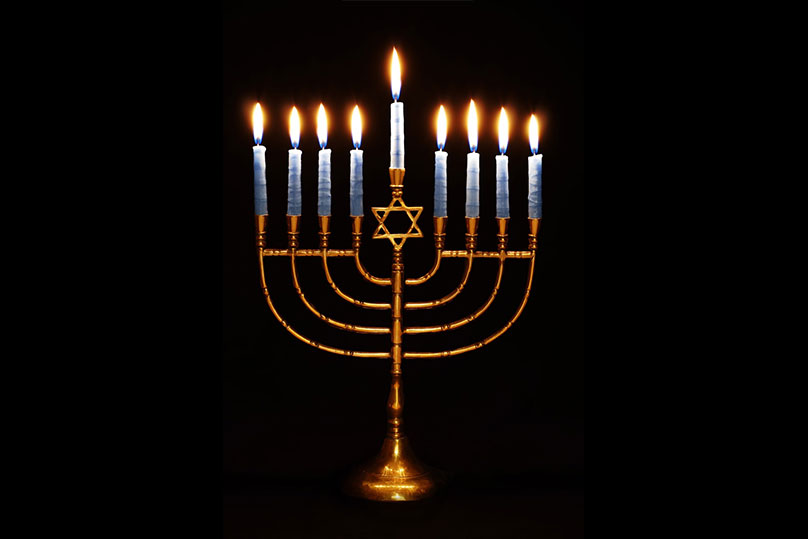 The Story of Hanukkah: A Story of Faith and Courage
We begin the story of Hanukkah during the reign of the Greek king, Alexander the Great. Alexander conquered Syria, Egypt and the Land of Israel and annexed them into his kingdom. He was a benevolent king who allowed the people in all of his lands to continue to observe their own religious beliefs and customs. Nevertheless, during this time of quiet, many Jews chose to assimilate into Greek culture. This group was termed Hellenistic Jews.
When Alexander the Great died, his Empire was divided amongst his generals. The Land of Israel has given to Seleucus. For over 100 years the Jews were afforded much of the same privileges and rights as other citizens of the Empire. However, Antiochus III, the great-greatgrandson of Seleucus, was forced to fight a costly war against the Romans. As a result the Jewish people fell out of favor with Antiochus III and thus the beginning of the end of equality for the Jews in the Syrian-Greek Empire.
In 174 BCE Antiochus III's son, Antiochus IV, began his reign over the Empire. He was a harsh and cruel king; a tyrant of reckless nature and contemptuous of religions and customs that were not his own.

Antiochus IV wanted to unite his kingdom under his religion, worship of the Greek idol Zeus. Within the Empire he stifled all Jewish Law. He removed the righteous High Priest Yochanan from the Temple in Jerusalem. Yochanan was replaced with his brother Joshua - a Hellenistic Jew who called himself by the Greek name Jason. Jason used his position as High Priest to infect the priesthood and the Jewish people with the traditions and religion of the Greeks. Jason was soon replaced by another named Menelaus who defiled the Temple with the worship of Greek idols.
Yochanan was outraged by his brother's behavior and that of Menelaus. When Antiochus IV was away fighting a war against Egypt Yochanan began to rally the Jews to disobey the new customs and religion being forced on them. The Jewish people were afraid of Antiochus' reprisals and mostly did nothing. However, when the Romans spread a rumor that Antiochus IV had been killed, the Jewish people rebelled against Menelaus causing him to flee.
Much to the horror of the Jews, Antiochus returned from battle alive and enraged by Roman meddling and Jewish rebellion. He ordered his army to strike out against the Jews killing thousands. Antiochus IV then ordered a series of extremely harsh decrees against the Jewish people and religion.
All Jewish worship was forbidden. All Scrolls of the Law were confiscated and burned. Observation of Shabbat, the Brit Milah, and abiding by Kashrut were all prohibited under penalty of death. As the soldiers went town to town ravaging the Land of Israel they forced Jewish inhabitants to worship their pagan idols and eat the flesh of pigs. Many complied, but some refused and died for their beliefs.
One day Antiochus' soldiers arrived in a town called Modiin just outside Jerusalem. An old, great priest named Mattiyahu was an inhabitant of this town. The soidiers built an altar to their pagan idols in the center of town and ordered Mattiyahu to worship at it. Mattiyahu refused. A Hellenistic Jew approached the altar to offer a sacrifice. Mattiyahu took out his sword and killed him, and his sons and neighbors sprang on the Greek soldiers killing or chasing them away.
Mattiyahu knew when Antiochus IV heard of this rebellion there would be a heavy price to pay. He fled together with his sons and neighbors to the hills of Judah. Here they lived in the caves and encouraged all loyal and courageous Jews to join them. They formed legions and would carefully leave the caves to attach outposts of Greek and Syrian soldiers and destroy pagan altars.
When old Mattiyahu was on his deathbed, he called his sons together. He encouraged them to defend G-d's Torah. He asked that the tactical leader be Shimon the Wise and in battle the leader be Judah the Strong. Judah was known as Maccabee - a contraction for "Mi Kamocha Ba'eilim HaShem" translated as "Who is like you, O G-d." This was sung to G-d by Moses and the Israelites after G-d parted the Red Sea giving them safe passage and destroying the Egyptians (Exodus 15:11).
Judah's followers became known as "The Maccabees" and caused great havoc to the Empire. Eventually Antiochus sent one of his best generals to wipe out this little band of Jewish fighters. Even though the Empire's army was much better equipped and greater in number, the Maccabees were triumphant in battle again and again.
Antiochus IV realized that he needed to put an end to this rebellion once and for all. He sent an army of 40,000 men in to the Judean hills. When Judah and the Maccabees heard the army coming they cried, "Let us fight to the death in defense of our souls and our Temple!" The Maccabees fought with G-d in their hearts and the honor of Judaism in their souls. They fought for their Torah and for their Temple. After a series of bloody battles, it was done. They had defeated the powerful army of Antiochus.
With their victory, the Maccabees climbed a mountain outside Jerusalem and looked upon the city. On the 25th of Kislev they descended the mountain to liberate Jerusalem and reclaim their Temple. As they marched into the Holy City they were distressed by what they saw - idols, impurity, and filth everywhere. They entered the Holy Temple and were shocked to see the same. Jerusalem and the the Temple needed to be made Holy again for G-d.

They began in the Temple, clearing it of all pagan idols and building a new altar. The golden Menorah has been stolen by the Syrians and Greeks so the Maccabees made a new one from what they could find. They wanted in light the Menorah to rededicate the Temple to the One True G-d. They rummaged though the ruins seeking a flask of sanctified oil, but all had been defiled. Finally, they found a small jug in which the Kohen seal was still intact.
They carefully poured the oil into their makeshift Menorah even though they realized that there was only enough oil for one day. They also realized that it would take eight days to sanctify more oil for the Temple. Nevertheless, the Maccabees had faith and dedicated the Holy Temple and lit the Menorah.
Then a great miracle occurred. The oil burned through the first night an on to the second, then on to the third. The oil continued to burn for eight nights until more oil was ready for the Temple. This miracle proved that G-d was with the Maccabee all along. They fought for what they believed and held fast in face of death with G-d at their side. Their faith in G-d and the Torah never wavered and G-d showed them His Devine presence.
Those eight miraculous nights have been chosen as the eternal commemoration of this miracle. We light the Hanukkah Menorah to show G-d our faith in Him, His Torah, and our beliefs and traditions.
As we light our Hanukkah Menorahs let us remember the Maccabees and their faith. And let us remember during Hanukkah and always that G-d is forever a protector His faithful.