General Information about the Ancient Boat

The boat, as discovered, measured 8.2 meters long, with a maximum breadth of 2.3 meters and a preserved height of 1.2 meters. It probably had a cutwater bow and a recurving side. The boat apparently represents the largest boat type in use on the lake in antiquity. It would have served primarily for fishing the rich waters of the Sea of Galilee, although it may also have been used to transport passengers and supplies around and across the lake.

The boat could have been sailed or rowed. It would have used a single square sail affixed amidships. Based on the vessel's size it probably would have had a basic crew of five to four rowers and a helmsman/captain. The boat would have been steered by means of two steering oars.

In 67 AD during the Roman conquest of the Galilee, the city of Migdal was a hotbed of Jewish revolt. The Jewish historian Josephus Flavius, who may have been an eyewitness to the events, describes how the Romans, under the future Emperor Titus, took the city after vanquishing a Jewish army arrayed on the plain of Gennessaret. A city wall protected Migdal from land invasion, but it was unprotected on the lake’s shore side. By sailing his mounted cavalry around the walls, Titus entered the city and massacred most of its inhabitants except for a few who fled with a group of fishing boats and harbored in deeper waters. The next day the Roman General Vespasian ordered the construction of vessels - apparently catamarans of some sort – for the purpose of attacking the Jews stranded in the lake. When ready, soldiers and archers took their places on these vessels and moving out into the lake, engaged the Jews. During the ensuing nautical battle, all the Jews were overwhelmed and killed. Josephus Flavius describes how the lake’s water turned crimson with blood and the shores were covered with derelict Jewish boats as a result of the battle’s aftermath.
(War 111: 462-542).

It was also the time when the thriving lakeside communities witnessed the ministry of Jesus and his disciples and the miraculous events related to the New Testament. For example the scene in Luke 5:1-7 most likely took place in a vessel just as the boat discovered at Ginosar.

Luke 5: The Calling of the First Disciples

“1One day as Jesus was standing by the Lake of Gennesaret, with the people crowding around him and listening to the word of God, 2he saw at the water's edge two boats, left there by the fishermen, who were washing their nets. 3He got into one of the boats, the one belonging to Simon, and asked him to put out a little from shore. Then we sat down and taught the people from the boat. 4When he had finished speaking, he said to Simon, "Put out into deep water, and let down the nets for a catch." 5Simon answered, "Master, we've worked hard all night and haven't caught anything. But because you say so, I will let down the nets."

6When they has done so, they caught such a large number of fish that their nets began to break. 7So they signaled to their partners in the other boats to come and help them, and they came and filled both boats so full that they began to sink.”

The vessel was built using the shell-based technique, in which the hull's planking was built up prior to the insertion of frames. The planks were edge-joined by means of mortise-and-tenon joints.

This construction method is well known from Mediterranean ship wrecks dated as early as 1300 BC through the Roman period, until it was replaced by skeleton-based construction in the course of the first millennium AD. Eminent ship reconstructor Prof. J. Richard Steffy, of the Institute of Nautical Archaeology at Texas A&M University, who studied the boat during its excavation, concluded that the techniques employed in its construction were consistent with those common on the Mediterranean around 100 BC – 200AD.

The boat's builders either learned this trade on the Mediterranean or had been apprenticed to a Mediterranean shipwright. At first glance, the planking pattern and choice of timbers used in the hull appear strange. Some planks are unusually narrow, and frames are poorly fitted to hull curves. However, this may be the result of a shortage of affordable wood, which forced an expert shipwright to use inferior timbers - ones that on the Mediterranean coast would have been discarded as unsuitable. The hull features numerous timbers that appear to have been recycled.

The boat's builders either learned this trade on the Mediterranean or had been apprenticed to a Mediterranean boatwright. At first glance, the planking pattern and choice of timbers used in the hull seem strange. Some planks are unusually narrow, and frames are poorly fitted to the hull curves. However, this may be the result of a shortage of affordable wood, which forced an expert boatwright to use inferior timbers which on the Mediterranean coast would have been discarded as unsuitable. The hull features numerous timbers that appear to have been recycled.

Pegged mortise-and-tenon joints were used to edge-join the hulls planks together and iron nails driven from the outside served to secure the frames to the hull. The boat has a fine bow and a deep site. The hull is constructed primarily of Lebanese cedar planks and oak frames, but ten other wood types have been documented in it. This may indicate a wood shortage in which the boatwright was unable to secure appropriate timber, or
perhaps the boat owner was too poor to afford it.

Analyses (by Dr. Ella Werker of the Department of Botany, Hebrew University, Jerusalem) of wood samples taken from the hull timbers revealed that the majority of the vessel's planks are made of Lebanese cedar, while most of its frames are oak. However, at least ten other types of wood all local to this area were used in the boat's construction.

Two pottery vessels, a cooking pot and a lamp, were unearthed at the boat site. The cooking pot, found outside the boat near the prow could be dated to sometime between the mid-first century BCE to the mid-second century CE. The lamp, found inside the boat was a type dated from the first century to the mid-second century CE. While these artifacts served as additional supporting evidence for dating the boat to the first century, they were not definitive. There was a possibility that they had been washed in by waves or currents, so they alone were not sufficient to date the craft.

Small piles of iron nails were collected from where the boat frames and planking, exposed above mud level, had disintegrated over time. Additional artifacts were also discovered in and around the boat.

A 1:10 scale model was built by Bill Charlton of Texas A&M University and was displayed in the museums foyer gives the visitor an idea of what a generic first-century AD Galilean boats from the early twentieth century.

More information about the 1st Century Boat in the booklet,
"An Ancient Boat Discovered in the Sea of Galilee." 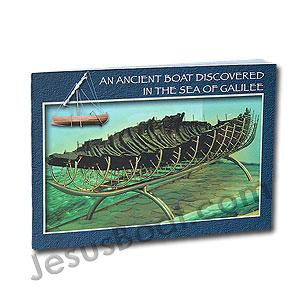