Recovery and Conservation
of the Ancient Galilee Boat

Conservation at the excavation site

When the boat sank, some 2,000 years ago, it began filling up with silt until much of its lower hull was encapsulated in a packed-mud time bubble, which slowed down the setting in of decay. However, the damaged inner cells of the wood had decayed and been replaced with water. Even when the boat appeared to be well preserved, the timber was in fact soft and spongy.

Excavation efforts concentrated on extricating the boat in one piece. The major problem confronting the excavators from the start was the need to protect the timber from drying, which would have led to shrinkage and deformation. It was the excavation team's aim to complete the excavation as quickly as possible then reimmerse the boat in water.

The fragile condition of the boat called for unusual excavation conditions. Excavators needed to clear the mud without handling or having any contact with the vessel. Therefore, a suspended platform was devised affording access to the inner hull. Excavators would lay on the platform and carefully remove the mud encasing the boat.

Throughout the round the clock 11-day excavation the boat was constantly sprayed with water to avoid dryness and thus distortion. The vessel was also kept shaded during the day to prevent drying from the sun.

Once the mud was cleared a method was needed to support the vessel for transport to the conservation facility. The method chosen was to install fiberglass ribs inside the boat. Then the entire craft was filled with polyurethane foam. The polyurethane foam created the same cocoon effect as the original mud encasement.


Transfer to the conservation facility

Suitable conservation facilities were a considerable distance from the excavation site. The problem of transporting this large, fragile body was resolved once it was packaged in foam. The vessel could then be securely floated to its destination. After 11 days of strenuous excavation work, water from the Kinneret was pumped back into the excavation pit, a passage was cleared in the dike surrounding it and the boat floated out on to the lake for the first time in 2000 years to the fishing-boat dock at Ginosar

A conservation pool of tiled reinforced concrete was built to shelter the boat throughout the conservation process. The polyurethane covering was stripped off and the vessel was nestled into a fiberglass frame. The conservation pool was then filled with water. The conservation facility was erected in a temporary insulated structure, inaccessible to visitors. It consisted of a 42 cubic meter pool of tiled reinforced concrete, equipped with a double-pump stirring systems, filters, and submerged heating elements, all computer-controlled. When the chemical process was complete, the structure was fitted with a sensor-operated environment-control system comprising air conditioning and humidity-control. The conservation process took seven years to complete. It consisted of gradually replacing the water in the wood cells with a solution of synthetic wax to reinforce the wood as it gradually dried.

Prior to initiating the conservation process, a series of examinations was conducted on samples taken from the boat timbers. The wood types represented in the boat and the different degrees of decay in its various parts called for an elaborate conservation method that would ultimately allow the boat to be exhibited in an ordinary museum setting.

The conservation process was based on treating the wood with polythene glycol (PEG), a synthetic water-soluble wax. The wax would replace the water accumulated in the deteriorating wood cells and eventually allow the wood to be dried and stabilized without undergoing any deformation.

Once the tests on the wood samples confirmed that the wood had fully absorbed the wax and there was no sign of shrinkage, the process had indeed been completed. At this point all involved in the project waited in suspense. What was the boat going to look like, after being hidden from sight in a dark pool for the past four years? Once the drying and cleaning of the boat were completed, documentation commenced, including photography, drawing and three-dimensional mapping using a laser measuring device (Teodolit laser).

Full documentation is an essential tool for archaeological study. In a case of structural damage it facilitates repairs of the boat.

Transportation to the Exhibition Space

The project of transporting the boat to its permanent place of exhibition was conducted in the early morning hours. The newly conserved ancient boat was packaged again for transport.

The packaged vessel was lifted by a crane and carefully lowered through the temporarily removed eastern wall of the newly-built annex of the museum into the exhibition space.

The exhibition space has been fitted with an environment control system, guaranteeing constant relative humidity, temperature and air pressure at all times. A movable platform, erected above the boat, affords easy access to all its parts, and allows for constant maintenance.

Once the environmental conditions in the exhibition space had been stabilized, the packaging materials and metal supports were removed. The 1st Century Galilee Boat emerged in its full glory.

More information about the 1st Century Boat in the booklet,
"An Ancient Boat Discovered in the Sea of Galilee."
(Click below for ordering information) 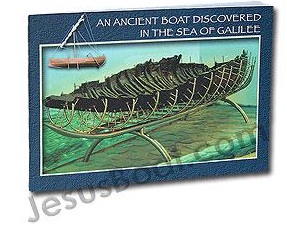