In the Golan Heights we know that summer has arrived when the cherries are in season. Beautiful red, juicy cherries hang heavily from the tree in orchards waiting to be picked. Many of the moshavim in the Golan operate u-pick orchards making for a fun and yummy outing.

The Jordan River running through the Galilee becomes filled with laughing friends and families in rubber rafts. The Sea of Galilee still with a surface like glass beckons to windsurfers, small sail boats and bathers along the shore to come and play. 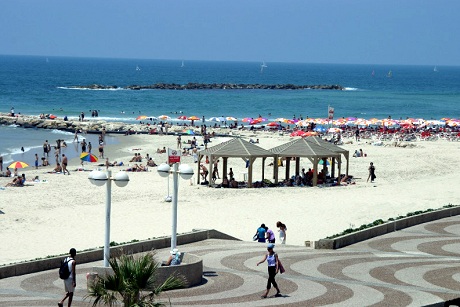 On the Mediterranean coast the precious sea turtles hatch in the sand and under watchful eyes of park rangers make their way to the sea. Beaches up and down the coast are packed with bathers, some to swim and surf, some to sunbathe and many to play “matkot”, a paddle ball game often called Israel’s national sport.

The Negev and Judean deserts become extremely hot in the summer, even for the native species. Therefore, with significantly cooler temperatures, nighttime is when the desert comes to life. Jeep tours take visitors out at dusk to see the animals beginning their nocturnal activities.

Israel's southern most city of Eilat attracts Israelis on vacation there to relax in the Red Sea resorts, swim with the dolphins and browse through the bizarre on the promenade. While it is hot in Eilat in the summer, fortunately the humidity is fairly low.

Much of the Israeli summer is centered on water. Whether on the beach, in community swimming pools, playing water sports or blasting down waterslides, spending time with water is definitely a favorite way for Israel to escape the heat. However, for Israelis the beach has to be the ultimate summer playground. Israel's 137 beaches include some of the world's most beautiful and diverse with shoreline along the Mediterranean, Red Sea, Dead Sea and Sea of Galilee.

Like many other countries Israel's children are on their summer hiatus from school called "hofesh hagadol", the Big Freedom. Most of Israel's kids attend "kaytana" or day camp. When day camp ends parents take kids on day trips to places like zoological parks and petting zoos, interactive museums and Israel's extensive national park system. Indoor air-conditioned climbing facilities and playgrounds are becoming more and more popular in Israel due to the heat.

And of course there’s the ice cream. Cold, delicious and refreshing in a multitude of flavors, the average Israeli eats about 10 liters of ice cream per year, the vast majority of which is in the summer. So if you're unable to get to any of the fun-filled summer activities, there is always time for an ice cream, the definitive taste of an Israeli summer.