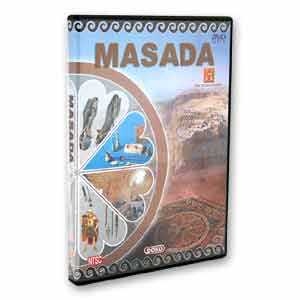 A production of the History Channel's prestigious Time Machine series.

Masada- a mountain fortress and symbol of Jewish independence.

Set deep in the Judean Desert, it was here at Masada 2,000 years ago, that the survivors of the Jewish Revolt gathered after the destruction of Jerusalem's Temple for a desperate last stand against the Roman Empire.

The Jewish rebels chose the 'impregnable' mountaintop palaces of Herod the Great as their refuge. But in 73 A.D. they watched as the mighty legions camped beneath them. Slowly the Romans built fierce siege engines and constructed a huge rampart that eventually bought them to the barricaded gates of the zealots'  retreat.

Having defied the forces of the mightiest army on earth for three years, in the end the zealots chose death by their own hands -- rather than face Roman slaughter or slavery.

Today, Masada is a symbol of Israel's struggle for freedom. This film travels back to the zenith of the Roman Empire to vividly bring its story to life.

Visit the zealots stronghold and Herod's magnificent Hanging Palace.
Roman base camp and 'walk' the fateful ramp that brought Rome to the rebels' doorstep.
Hear their leader's words as he exhorted his followers to mass suicide rather than risk falling into Roman hands.
Explore the legendary story and complex legacy of Masada.