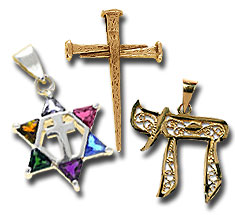 Back to Inspirational Pendants Shop

The expression of personal faith through jewelry is considered a tasteful and elegant way to share your feelings with the world. Inspirational Pendants from the original Jesus Boat Shop, JesusBoat.com, include Messianic pendants, Jewish pendants, Christian pendants, Hoshen Pendant and Hebrew name necklaces. Most of the inspirational pendants include a religious symbol such as the Grafted In, Star of David or Jerusalem Cross. Wearing these symbols can inspire comfort and spiritual wholeness to one’s being. Nearly all of these beautiful pendants are made with either 14kt gold or 925 sterling silver. Many of them have other embellishments such as 2000 year old Roman Glass or cut crystals.

Messianic is a biblically-based movement of people who believe Yeshua (also known as Jesus) is the Messiah of Israel of whom the Jewish Law and Prophets spoke. Messianic Believers celebrate the Biblical feasts Passover, Sukkot, and Shavuot just as Yeshua did. Many of the symbols associated with the Messianic movement incorporate traditional Jewish symbols and traditional Christian symbols. Messianic symbols include the Grafted-In which is composed of the Fish, Star of David and Menorah blended together in one cohesive adornment. The wearer of the Grafted In is displaying their conviction in the merging of the two belief systems of Judaism and followers of Christ. The Messianic Star is a Star of David with the Christian Cross in the center. Wearing the Messianic Star is for anyone who recognizes the history of Christianity. It visually links the two faiths of the one living G-d. Believers of all denominations can wear a religious pendant with Messianic symbols as a part of exploring the Jewish roots of their personal faith.

The Star of David is the symbol most commonly associated with Judaism today. It is named after the revered King David and the shape of his mighty shield. This six-pointed star symbolizes that G-d rules over the universe and protects us from all six directions: north, south, east, west, above and below. Other Jewish symbols include the Menorah (the seven-branch candelabra), the Chai (the Hebrew word for “Life”) and the Hoshen (the Breastplate of the High Priest). All are beautiful symbols of the religious origins of Yeshua (Jesus). Wearing a religious pendant with Jewish symbols is for anyone who feels a connection to their Jewish roots and would like to manifest that he or she are following the footsteps of Messiah and believe as He believed.

The most widely known symbol of Christianity is the Cross. The Cross comes in many different designs, one of which is the Jerusalem cross. The Jerusalem Cross consists of one large square cross and four smaller crosses, one on each angle of the main cross. The main cross represents Christ and Jerusalem, the beginning and center of Christianity. The four smaller crosses symbolize the four books of the Gospel and the spreading of the Word from Jerusalem to the four corners of the earth. Wearing a religious pendant with Christian symbols is a moving declaration of faith in the ministry of Jesus Christ.

Hoshen pendants are inspired by the richly embroidered linen breastplate that was worn by Israel’s High Priests. The Hoshen is also known as the Priestly Breastplate or Aaron’s Breastplate. The original breastplate had 12 stones one for each Tribe of Israel and was made as described in Exodus 28:15-20. Today, inspirational pendants inspired by the Biblical Priestly Breastplate are faithful to the original breastplate design – twelve colored stones set in four rows of three each. Hoshen pendants make for a very attractive piece of jewelry which represents the Nation of Israel’s beautiful culture and religion.

Hebrew Name Necklaces are a fun way to show your support of Israel. Any name can be chosen for the Hebrew name necklace – your given name, your Hebrew name, “mother” or “sister” written in Hebrew are just a few examples. The necklace with the Hebrew name you have chosen will be custom made for you and will be your special piece.


Back to Inspirational Pendants Shop